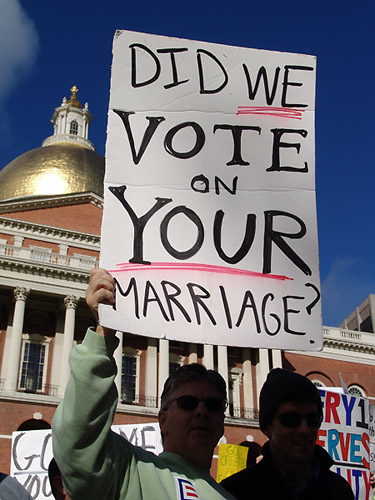 Across the nation ballot propositions involving the rights of same-sex couples were decided on Election Day. In California Proposition 8 passed and aims to institute a constitutional amendment to ban homosexual marriages. Voters in Arkansas chose to forbid same-sex couples the right to adopt children or take in foster children. Florida and Arizona also passed propositions that outlaw gay and lesbian marriages.

Despite the emergence of the new Religious Left as an electoral force, Conservative Evangelicals still played a significant role. As reported in the New York Times, Rev. James Garlow, senior pastor of Skyline Church in San Diego Country claims, “It [the passage of Proposition 8 in California] was a great victory. We saw the people just rise up.”

The success of Barack Obama in getting Hispanics and Black Evangelicals to the polls in record numbers may also have contributed to the passage of the propositions that will strip same-sex couples of marriage and adoption rights. Thus it remains to be seen what roll advocacy for gay rights will play in the new political movement that it coalescing on the Evangelical Left.